A friend asked me why I started using my middle initial in bylines. I answered, “Because some guy in prison named Eric Frazier ranks higher in Google searches than I do.”

If you have never searched your own name online, you should. You need to see what other people are seeing—and almost certainly, someone has used your name in a search. Twenty years ago, such searches were derisively dubbed “egosurfing,” “vanity searching,” “Googling yourself” or “self-Googling.” That sounded like something you would only do in private and never admit or talk about.

No more. This is the age of the “selfie.” For anyone who publishes anything on the web, searching your own name and monitoring your online identity has become a necessity. With the proliferation of social networks, like Facebook and Twitter, that means just about everyone.

Years ago, when I started writing for my hometown newspaper, The Dispatch, in Lexington, NC, I thought my first and last names were adequate. I was the only Eric Frazier in town, and my family operated a business with our surname on the building. Confusion seemed unlikely. The paper’s paid circulation at the time was only about 12,000; the city’s population was only about 18,000, and few people outside of Davidson County, then with about 125,000 residents, would ever read my writing.

Then, I started doing some freelance work for publications with a national readership. Then, came the Internet. One day, someone told me they had enjoyed my article in The Charlotte Observer. Huh? Had it picked up a Dispatch story via the Associated Press? I discovered that another reporter named Eric Frazier—a fine writer and a nice guy, who I later met at a N.C. Press Association event—was using the same byline.

After I started working for the Wake Forest University News Service in 2007, I added my middle initial “F” to my byline. (It stands for Franklin, which was my paternal grandfather’s middle name.) I had used the initial in my legal signature for years, but as a byline it seemed too stiff and formal. That feeling changed, and here is what sealed my decision.

At the WFU News Service, I wrote stories about academic research discoveries and pushed them out through services like PR Newswire. To track which news outlets published them, I used online searches that included the headline, keywords, and my name.

By then, I had learned that there are an estimated 254 people in the United States named Eric Frazier. (You can see how many people share your name at HowManyofMe.com.) Other people who share my first and last name include a jazz musician, a photographer, a real estate agent, an insurance agent, and an athlete—an Iraq War vet who is a member of the U.S. Paralympics Nordic Skiing National Team competing in the Sochi 2014 games.

During my online searches, I encountered reports about a man with my name who had committed a serious crime, been convicted and imprisoned. If I had any doubts about the need to differentiate myself online, this discovery erased them.

Adding my middle initial distinguished me from others who share my name and helped separate my work online from the gaggle of other content, allowing it to rise to the top of searches using my name with the initial. It’s not foolproof, since many searches will omit the initial. I was reminded of that recently, while reviewing a Google Analytics report for this website. It showed a visitor who arrived here after typing “eric frazier convict” into the Google search engine. Ouch!

Our traditional grading system has conditioned many people to associate the letter “F” with failure. I got two of them by birth but none in school, so I am quite fond of the letter, which also happens to lead such important words as faith, family, freedom, food and fun. I now happily include it in my byline, and it sure beats being confused with a convict. 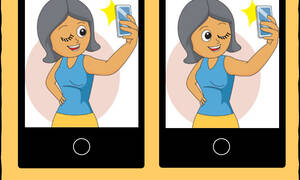 Dear Web: Shut the F*ck Up!