Congratulations, fellow Americans, our nation’s infrastructure is not failing. We have squeaked by, once again, with a D+ grade.

This new Report Card comes as the Federal Reserve has begun normalizing interest rates. The Fed announced March 15 a third .25 percent increase of its benchmark rate, which had languished near zero since the Global Financial Crisis in 2008. Fed Chair Janet Yellen says the economy is perking up. Inflation, employment and wage growth are rising.

This means we have largely squandered eight years during which we could have financed infrastructure improvements at historically low costs. Going forward, labor, materials and financing will cost more.

As a nation, this should feel a little like the morning of an exam, when the truth hits home that you failed to budget enough time for studying.

Cynics may argue that civil engineers have a vested interest in advocating large engineering projects. On the other hand, who are you going to call to evaluate your rusty bridge?

It’s worth noting what ASCE considers a D grade:

“The infrastructure is in poor to fair condition and mostly below standard, with many elements approaching the end of their service life. A large portion of the system exhibits significant deterioration. Condition and capacity are of serious concern with strong risk of failure.”

Hey, that beats an F: “Failing/Critical, Unfit for Purpose.”

ASCE grades 16 categories of U.S. public infrastructure: aviation, bridges, dams, drinking water, energy, hazardous waste, inland waterways, levees, ports, public parks & recreation, rail, roads, schools, solid waste, transit, and wastewater. For 2017, we got 12 Ds, three Cs and one B. Since 1998, that B, for rails, is the only category we have improved by a full letter grade.

We are like struggling students who haven’t quite learned our lessons but keep getting advanced to the next level. The learning deficits mount—inability to master fractions short circuits algebra, rendering geometry and calculus impossible.

Our infrastructure repair backlog impedes economic growth and endangers public safety. It drags the United States, once the most advanced nation on earth, backward. We risk becoming the equivalent of an adult who can barely read a job application and cannot spell well enough to get the job. This is no way to recruit factories back to the U.S.A.

Why Don’t We Fix Our Infrastructure?

Neglected infrastructure reflects ordinary procrastination, polarized politics, dysfunctional governance, and our innate (almost crazed) attachment to individualism and private ownership. Aversion to public ownership erodes support for needs that inherently must be shared. Each of us simply cannot have our own interstate, airport, electric grid or water treatment plant.

Infrastructure projects require huge sums of money and lots of regulatory approvals to protect people (and other species) affected by the work. That guarantees arguments and delays under the best circumstances. Hyper-partisanship hampers legislative agreement on spending, while private opponents—homeowners in the path of bulldozers, environmentalists, etc.—use the courts to slow or halt projects.

Infrastructure obstruction traces back to our founding. President James Madison, just before leaving office in 1817, vetoed a bipartisan bill that would have created “a permanent fund for internal improvement,” like the more recent idea of an infrastructure bank. Madison couldn’t find language in the Constitution explicitly empowering Congress to build roads and canals, so he left the job to the states.

Obstruction was the Republicans’ central organizing principle during the Obama administration. While Democrats still controlled the House and Senate, President Obama managed to pass the American Recovery and Reinvestment Act (ARRA) of 2009. The $787 billion stimulus package promised $69 billion for infrastructure, with $48 billion earmarked for 15,000 transportation projects. Although ARRA created some badly needed jobs and propped up shaky state finances, only $30 billion made its way to transportation infrastructure.

How Much Do We Need to Spend?

President Trump campaigned on a proposal to spend $1 trillion on infrastructure. Democrats signaled they might support him. How far would $1 trillion go? First, a visual for that staggering sum.

But for infrastructure, $1 trillion is less than a quarter of what we need. ASCE estimates the total needed over 10 years to bring our infrastructure up to good condition at $4.59 trillion, up from $1.3 trillion in 2001. Now, that’s a moonshot. 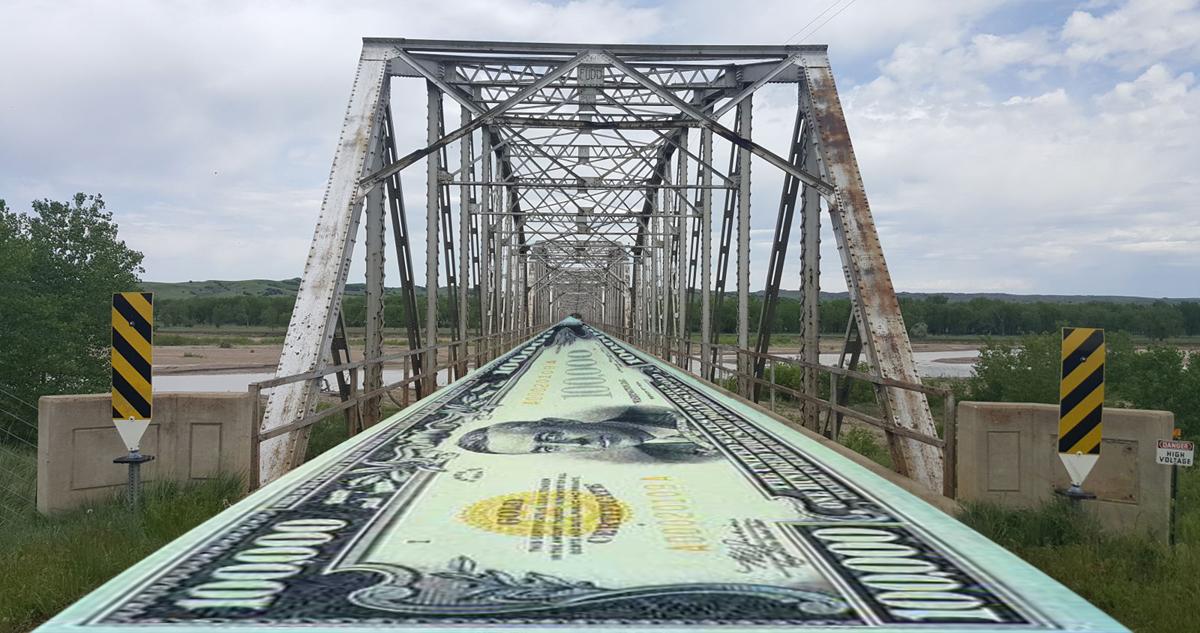 We Need a War on Rust

The arrival of Trump’s first “budget” (a so-called blueprint that’s more of a rough outline) dashes hope for cooperation. Proposing to snatch warm meals from the home-bound elderly and close after-school programs for disadvantaged youths—tiny fractions of the federal budget—poisons negotiations before they begin. And his $1 trillion infrastructure figure is nowhere to be found.

Trump wants to add $54 billion to a military budget that already spends more than China, Saudi Arabia, Russia, the United Kingdom, India, France, and Japan combined. That gives me an idea: Declare war on rust. Nationwide. Wherever it hides.

Getting our nation to invest public funds in large, long-term projects is easier if they’re connected to the military. For example, The Dwight D. Eisenhower System of Interstate and Defense Highways and beating Communist Russia to the moon.

Tallying the economic benefits of smooth highways, uninterrupted electricity, safe drinking water or good schools is almost impossible. We need only to look at places where those things don’t exist—undeveloped or war-ravaged countries—to understand that these “internal improvements” are integral to the standard of living we want and expect. Investments in research and development and new infrastructure raise those standards over time. Think internet.

In the 1970s and early 1980s, Congress argued over funding development of GPS, run by the Air Force. From its inception, taxpayers have spent about $42 billion on GPS. Not only did the technology revolutionize weapons and war-fighting, a 2015 study estimated that U.S. civilian/commercial benefits in a single year equal or exceed the total spent to date.

Economists argue endlessly about the benefits of government spending, but Pentagon programs seem sacrosanct (and cannot be audited, apparently). So, why stop at $54 billion? Why not propose a $4.59 trillion Defense increase over 10 years to fix our infrastructure?

Given the volume of bullshit that flows from Washington, classifying municipal wastewater treatment plants as defensive infrastructure seems like a no-brainer.