You’ve heard, no doubt, that Vladimir Putin threatened to nuke anyone who “interferes” with his rape of Ukraine. But did you know that he threatened to destroy America’s entire fleet of GPS satellites back on November 15, 2021?

Major media quickly moved on from that threat, which is arguably the more credible one.

Nobody knows whether Putin is willing to unleash nuclear Armageddon if he cannot achieve his dreams for Russian empire. Mutual assured destruction (MAD), the crazy calculus of the atomic age that makes launching nukes “unthinkable,” should dissuade him if he’s still sane. If he isn’t, hopefully saner Russian heads among his military will prevail.

Attacking our GPS satellites, on the other hand, is not only thinkable but doable. And certain factors increase its appeal and likelihood. Below are the reasons I’m worried Putin might make good on his threat.

Does Russia possess the capability to destroy our GPS satellites? The answer appears to be yes. A high-profile demonstration preceded the verbal threat. Russia fired an anti-satellite missile into low earth orbit (a zone roughly 100 miles up to 1,250 miles) and destroyed one of their own retired satellites.

Putin’s test endangered the International Space Station. Its crew of seven, including two Russians, sheltered nervously in evacuation capsules as the ISS passed the debris cloud.

Conducting a rogue test despite such risks shows how seriously Putin has contemplated using anti-satellite weapons. One of his propagandists appeared on state TV afterward to declare, “If NATO crosses our red line, it risks losing all 32 of its GPS satellites at once.”

The number of active GPS satellites in orbit is currently (and usually) 31. Ground control systems accommodate a maximum of 32 satellites, so controllers use that last open slot to test newly launched replacements before sending older ones to higher pastures.

We don’t know whether Putin has built dozens of anti-satellite missiles or concluded that he could knock out half a dozen and let debris impacts disable the rest. When GPS World magazine asked three experts if Putin’s GPS threat was “technically realistic,” all three affirmed it was.

What could drive Putin to attack our GPS satellites? Conventional scenarios envision tit-for-tat ground fighting escalating to space. But another scenario is possible.

Putin’s threat looked at first like straightforward military posturing. NATO expansion was his red line. GPS satellites enable guided missiles. The threat seemed like a brush-back pitch to U.S. officials since there was no mention of Galileo, the European Union’s version of GPS.

Upon invading, Putin made his red line fuzzier, threatening “anyone who tries to interfere with us.” He upped the ante to nuclear weapons and put Russia’s nuclear forces on high alert.

Putin underestimated Ukrainian resolve and international reaction. Everyone underestimated economic sanctions, which have shuttered Russia’s stock market, decimated the ruble and sparked voluntary boycotts. “These sanctions that are being imposed are akin to a declaration of war,” Putin told a class of Aeroflot flight attendants in training, who now may never fly beyond Russia’s borders.

Sanctions are an asymmetric attack that Putin cannot directly counter. Economic pain could drive him toward asymmetric attacks the U.S. and NATO cannot counter — using anti-satellite missiles to attack our GPS satellites.

Since the 1960s, the United States has put little effort (as far as we know) into anti-satellite missiles because their use would render the space environment unusable for satellites. U.S. strategy has emphasized strengthening our military signals while jamming enemy access.

Russian military doctrine assumes that signals from their GLONASS satellites (Russia’s version of GPS), will be unavailable during war. They train to fight without them and have a ground-based backup called Loran, which uses low-frequency signals that cover Russian territory and much of Europe.

Unfortunately, the U.S. Coast Guard’s aging Loran system was shut down in 2010. Congress in 2018 authorized studies for a new ground-based backup for GPS, but we are years from having one.

When might Putin try to attack? Given the well-known orbits and positions of GPS satellites, he could attack them any time he chooses. Unless our military has built classified defensive and avoidance capabilities into GPS satellites, they are sitting ducks.

In 2016, I visited the GPS Master Control Station at Schriever Air Force Base, an ultra-secure facility near Colorado Springs, where the 2nd and 19th Space Operations Squadrons monitor GPS satellites each moment of every day. (Vandenberg Space Force Base in California hosts a duplicate back-up facility.)

I raised the subject of threats, such as ground-based lasers and miniature “attack” satellites. Specifically, I asked whether ground controllers could steer a satellite away from an approaching object. An awkward pause followed. Whether I’d strayed into classified territory or identified a weakness, I don’t know.

The response was guarded glances and boilerplate language about the onboard propulsion systems used for orbital adjustments. I came away thinking GPS satellites probably have more maneuverability than is publicly acknowledged, but a finite amount of thruster propellant and the laws of physics pose limitations.

On the other hand, GPS satellites orbit at about 12,550 miles altitude, far higher than the Russian test. Hitting all 31 satellites traveling around 8,700 mph would be a feat. However, hitting multiple satellites could be enough to degrade GPS—and pollute a vital region of space indefinitely.

I’ve spent years trying to educate people about our extensive civilian reliance on GPS, a dual-use military system that enables far more than turn-by-turn navigation for motorists. Still, most associate GPS only with geo-location, unaware that it is made possible by the precise timing of atomic clocks. Consider this partial list of non-military GPS uses:

The Research Triangle Institute estimates that GPS has contributed $1.4 trillion in economic benefits to the private sector since 1984. RTI projects that a widespread GPS outage would cost our economy about $1 billion per day.

Most folks are indifferent about who owns GPS or how it works—as long as it does. GPS operates unseen as if by magic, but it is not. It is a physical constellation of military radio transmitters in space that present a tempting target for Vladimir Putin.

In a stroke, he could inflict enormous costs on both our military and our economy. It is a step short of nuclear war but one with immense and lasting impact.

Americans are totally unprepared for life without GPS. That makes us sitting ducks, too. 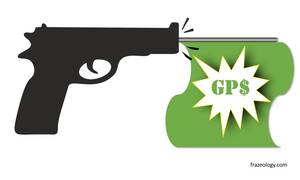 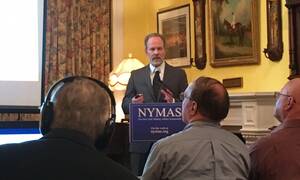