Most people can only dream about the experiences that Yemi Adegbonmire (’00 JD ’05) routinely enjoys as an entertainment industry lawyer.

She has worked on television contracts for actor William Shatner, cheered on her friend, singer-songwriter-actress Mýa, from the studio audience during “Dancing with the Stars” and appeared in Keyshia Cole’s music video “You Complete Me.”

“I was just at the premiere for ‘Faster’ last night, so that’s what I get to do in my free time,” she says matter-of-factly during a phone call from her West Hollywood home. The new film stars wrestler-turned-actor Dwayne “The Rock” Johnson.

What is surprising is that sh 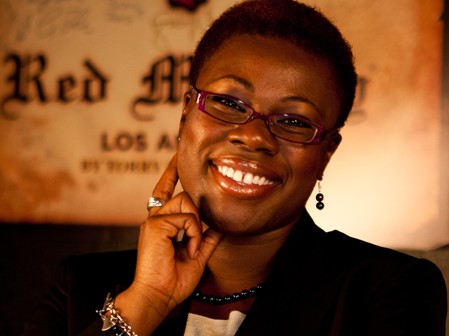 e has spare time. When she is not putting together deals for famous performers, she is helping inventors protect and license new technologies. In addition to her intellectual property law practice, Adegbonmire just returned from Thailand, where she lectured on “net neutrality” issues, and Mount St. Mary’s College in Los Angeles has asked her to design and teach a course on law and the arts.

She traces her passion for the arts to early childhood. One of her earliest memories is of hearing the six-woman a cappella ensemble Sweet Honey in the Rock perform when she was 4 years old. The spiritual music and colorful costumes created a “vivid experience” she never forgot. “I think that ultimately relates to the fact that I am a person who is so incredibly moved by music and the arts generally,” she says.

A bent toward intellectual property issues showed up early, as well, in that she was quite brand conscious from an early age. She recalls carrying her own Curad brand bandages in her pockets as a child because their translucent material allowed her natural skin color to show through, unlike the “peach-colored” competitor. “It makes some sense to me that I’m building a career that centers around the arts and around products that people come to rely on and love in their everyday lives,” she observes.

Adegbonmire grew up in Baltimore. She was born at The Johns Hopkins Hospital, where her mother, a Baltimore native, works as a pre-admission counselor. Her name, pronounced Ah-day-bo-marry, comes from the Yoruba language of her Nigerian father.

She attended The Bryn Mawr School, a private, all-girl day school, and after graduating in 1996, chose Wake Forest University partly because the campus reminded her of Bryn Mawr.  She says her mother was most impressed that every Wake Forest student got a laptop computer, while her own decision was sealed when she discovered that renowned poet Maya Angelou was on the faculty. Eighteen months before, Adegbonmire crossed paths with Angelou at a teen summit in Washington, D.C.  As the poet spoke some inspiring words to her group, Angelou locked eyes with her. “I wish I could remember exactly what she said,” Adegbonmire laments. “…My insides were shaking, I remember.”

Not surprisingly, she was a busy student, serving on the Honor Council, singing in the Gospel Choir and active in the Delta Sigma Theta sorority. As a double major, she earned degrees in English and Sociology when she graduated in 2000. Then, she faced a decision. She applied to and received acceptances from the Wake Forest School of Law, and master’s programs at Emory University and Johns Hopkins University.  Wake Forest offered her a deferment, and she entered the Master of Health Science program at Johns Hopkins. “I sort of just had to go,” she says.

During her second-year practicum, she worked for the U.S. Department of Health and Human Services, which offered her a job upon completing her degree. She faced another choice. “I really wanted to be a lawyer,” she says. “At the same time, I was getting some traction in the public health world. I had to make a decision, so I did.” She returned to Wake Forest in 2002.

As a law student, Adegbonmire was naturally involved in many activities, including Inn of Court, Trial Bar and serving as managing editor of the Intellectual Property Law Journal. She even started a lecture series and brought Angelou in to speak. In her final semester, she faced another tough decision when she learned that the partners of a Philadelphia law firm—where she had clerked the previous summer and been offered a position—had dissolved the partnership. “It was sort of devastating,” she admits.

A visit soon after to Los Angeles, where she participated in American Bar Association activities connected with the Grammy Awards gave her a new direction. With her mother’s encouragement, she moved to California eight days after graduation and began preparing for what many consider the most difficult bar exam in the nation. She passed on her first attempt and worked for a couple of different entertainment law firms before joining the ABC Television Network in 2007. She spent two years at ABC, working on such programs as “The Bachelor,” “Dirty, Sexy Money,” “Eli Stone” and “Desperate Housewives.” A typical network show has dozens of performance and licensing contracts that keep legal staffs busy, she notes.

In the fall of 2009, Adegbonmire left ABC to begin a solo practice. She represents a variety of creative clients, from writers and entertainers to Red Monkey brand custom leather apparel and a high-tech company she cannot name that is developing a new consumer electronic device. What excites her most about her role? “I get to see the best of ingenuity,” she says.

Going solo has brought challenges, but even more so, it has brought flexibility and opportunities she might not otherwise have—like appearing in a music video. Long-term, she wants to develop a diversified practice that includes about 30 percent international clients. “I want to deal with clients that have multi-national business interests,” she says. “I think it’s going to be harder and harder not to think of your brand in a global way.”

Adegbonmire has found success through serious study, hard work, calculated risks and following her natural inclinations. Her advice to young law students is simple, yet profound: “Nurture every interest, and seize upon every opportunity,” she says. “We gain nothing by living small.”