Every time I click “Accept” or “Agree” on one of those software end-user license agreements, I feel like a schnook. That’s Yiddish for a person who is gullible or easily cheated. (One Yiddish word generally outworks half a dozen English words.)

How many of us even try to read such mile-long cyphers of legalese? They might as well be written in, well, Yiddish. The alternate buttons beside “Decline” should read “Submit” or perhaps “Surrender.”

So, the prospect of Facebook founder Mark Zuckerberg being sacrificially roasted by Senate and House committees sounded delicious. But watching those high priests of legalese dress down Zuckerberg, dressed up in his apology suit, for violating the trust of his constituents was…let’s just call it surreal.

And, overdue. No better evidence illustrates of how far the horse is out of the barn than Zuckerberg’s admission that his own personal data was compromised.

Whether genuine or contrived, it was entertaining to hear Louisiana Republican John Kennedy bellow, “Your user agreement sucks,” on behalf of all of us schmucks. (Look it up.) Like Kennedy, I’ll use Zuckerberg here as my punching bag, a stand-in for all big internet companies.

The problem with fulminating against Facebook for online invasion of privacy is that we users cannot plausibly claim ignorance or deny complicity. We signed up for this.

Today, online sellers analyze every click we make, every product we view, even how long we linger. Algorithmic sales-bots stalk us across the internet like zombies, continuing to pitch one-time purchases we will never repeat. We’ve traded the warm but fuzzy embrace of neighborhood shopkeepers for the cold, precise grip of big data.

We are habituated to these distractions and expect or tolerate them on social media platforms. Facebook constructs an experience that feels like bumping into friends and sharing pleasantries and snapshots at the supermarket. Nice photo of your family! My, oh my, your cat is funny! Look where we ate dinner last night.

More Than We Bargained For

Behind this benign facade lurks a stark reality. Electronic surveillance and data analysis today are extremely powerful. The technology approaches a mashup of George Orwell’s 1984, the movie Minority Report, and similar dystopian visions. Our online activities produce troves of data that can be sliced and diced for countless purposes.

Everyone knows that companies compile census-like personal information about customers—age, gender, location, education, income, etc. Most understand that marketers combine personal data with shopping behavior to refine products and target advertisements. Users expect Facebook itself to leverage its massive archive of our social behavior—Likes, Comments and even private Messages—to try to sell us stuff.

What few imagined was how easily third parties could access and misuse Facebook’s data. This March, a whistleblower revealed how Cambridge Analytica breached and weaponized Facebook’s vast data arsenal in the 2016 election. The consulting firm used data from up to 87 million Facebook users and innocent-looking online personality tests to craft psychographic profiles and target sophisticated propaganda designed to shape political culture and sway elections.

It’s notable that online quizzes fueled this abuse. They are in Facebook’s DNA. Zuckerberg founded Facebook in 2004, after almost getting kicked out of Harvard in 2003, for using women’s photos without permission for side-by-side, hot-or-not? surveys on a website he called Facemash.com.

If Cambridge Analytica’s behavioral scientists can do what they claim, going on Facebook seems less like a stroll through the supermarket than a session at the shrink under truth serum.

Privacy also cuts two ways. Keeping personal information private is one thing. Being able to use stolen personas and posts that conceal hidden purposes is another. As Zuckerberg admitted in the hearing, Facebook has to be responsible for the content on its site. That will require more transparency all around.

When Robert Mueller indicted a bunch of Russians for stealing the online identities of Americans and creating phony profiles and social media posts during the 2016 election, I recalled one of my favorite New Yorker cartoons. In it, two dogs sit at a computer, and the one at the keyboard says, “On the Internet, nobody knows you’re a dog.”

It turns out this prescient observation dates back to 1993. The cartoon even has its own Wikipedia page. For 25 years, we should have seen this coming.

But until Zuckerberg does more to ensure that profiles are real people, posts are not robots and data is locked down, I’ll be tempted to call his operation Faceschnook. 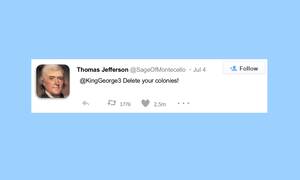