Fifty years after men walked on the moon, their footprints remain pristine, unchanged by wind, rain or time. Back on Spaceship Earth, the elements grow extreme and time grows short.

Atmospheric carbon dioxide, global mean temperatures, and coastal sea levels are all on the rise. As are deforestation, energy consumption, and beachfront development.

Against a half century of rapid technological and climatological changes, some thing remains notably unchanged on Earth. Among the worst are widespread poverty, ignorance, fear, distrust, racism, mean-spiritedness, and unwillingness to do hard things today to avoid harder problems tomorrow.

Yet, as we mark Apollo 11’s 50th anniversary, a central truth stands out. The race to the moon altered earthbound culture more profoundly than it advanced our spacefaring ambitions.

I was 11 when Apollo 11’s grainy video captivated the planet. Our family often spent Sunday afternoons at my grandmother’s house watching her console TV. It looked like the spawn of an overgrown lab oscilloscope and bedroom dresser.

On this special Sunday, afternoon programming switched from golfers sinking birdies to Neil Armstrong and Buzz Aldrin landing the Eagle. And there were no arguments about staying up until 10:56, when Armstrong toed the powdery surface. American know-how had triumphed.

The next day, a Times article quoted former president Johnson saying the landing proved “we can do anything.” A headline predicted: “In the Next Decade: A Lunar Base, Space Laboratories and a Shuttle Service.” An editorial contemplating lunar development asked, “Capitalist Moon or Socialist Moon?”

After the splashdown, a euphoric President Nixon called the week “the greatest in the history of the world since the Creation,” and predicted that “In the year 2000, we on this earth will have visited new worlds where there will be a form of life.”

Back to the Moon?

No moon base or Mars mission followed. The expense, complexity and dangers of space travel proved greater than assumed in the heady summer of 1969. NASA has done great science in space, but humans have been stuck in low Earth orbit since Apollo 17 completed the last moon mission in 1972.

Skylab orbited from 1973 to 1979, before being evacuated and falling back to Earth as cinders. The International Space Station (ISS), begun in 1998, has been an unqualified success. Since 2000, up to six people at once, nearly 250 from 18 countries, have continuously inhabited it. (As I write these words, three Expedition 61 crewmembers are headed to the ISS on the 50th anniversary of Apollo 11.)

The Space Shuttle program flew 135 missions from 1981 to 2011—an undeniable but bittersweet success story. Two shuttles suffered catastrophic failures, one on takeoff, another on re-entry. Since its retirement, Americans have hitched rides to the ISS aboard Russian rockets. NASA is counting on the private SpaceX Falcon 9 rocket and Dragon crew capsule to resume crewed flights. Although behind schedule, success appears likely by next year.

President Trump wants to return to the moon by 2024. But the technology and institutional memory have been lost. The proposed rocket hasn’t been tested and is behind schedule. NASA currently lacks a lunar lander or spacesuits suitable for moonwalks. The budget is pending.

All in all, the watchwords for space travel remain patience, please.

The space race produced practical and philosophical changes on Earth.

But the more subtle and pervasive effect of seeing Earth from space is how that perspective shifts our existential self-awareness. Astronauts  invariably describe it. By 1987, author Frank White dubbed it “the overview effect.”

Archimedes (287 BC – c. 212 BC), the Greek mathematician who formulated the principles of levers and fulcrums, is believed to have said, “Give me the place to stand, and I shall move the earth.” With spaceflight as the lever and the moon as fulcrum, science leveraged a new worldview. This shift began long before we physically landed on the moon.

In 1879, the economist Henry George wrote, “It is a well-provisioned ship, this on which we sail through space.” Successors, from George Orwell to Adlai Stephenson, echoed the symbolism. In 1966, Kenneth Boulding published an essay, “The Economics of the Coming Spaceship Earth,” and Barbara Ward titled a book Spaceship Earth. Still, no one had seen the entire vessel.

On November 10, 1967, a year before Apollo 8 orbited the moon, NASA’s ATS-3 weather satellite in geostationary orbit (an altitude of about 22,236 miles), transmitted the first full-disk, color photograph of earth from space. For the first time, humans saw their spaceship from afar.

Stewart Brand adopted the photo for the cover of his Whole Earth Catalog. Without question, this counter-cultural publication and the early environmental movement were mostly the province of academics and hippies.

The moon race, the public face of a cold war with the Soviet Union, enlarged popular interest in space by adding a human element and competitive drama. Apollo photos from space and the lunar surface garnered far more viewers than that first satellite photo. Astronauts offered powerful eyewitness testimonies:

“Oddly enough the overriding sensation I got looking at the earth was, my god that little thing is so fragile out there.”

— Mike Collins, Apollo 11 command module pilot, interviewed for the 2007 movie, “In the Shadow of the Moon.”

”You develop an instant global consciousness, a people orientation, an intense dissatisfaction with the state of the world, and a compulsion to do something about it. From out there on the moon, international politics looks so petty. You want to grab a politician by the scruff of the neck and drag him a quarter of a million miles out and say, “Look at that, you son of a bitch.”

The view from space reveals national boundaries to be arbitrary. It confirms that Earth’s ecosystem is a closed system that encompasses all of us.

Apollo 13 even offered us a preview of our current predicament. After the command module suffered a serious inflight explosion, the crew limped home using the lunar module and survived only by improvising a filter to remove the deadly carbon dioxide buildup in the cabin.

All in all, the watchwords for climate carbon reduction should be impatience, please.

Too many today ignore or deny climate science. They behave as if their great-grandchildren will be able to retreat to some separate environment, walled off, privatized and immune from climate threats. They should consider how costly and difficult the space program has found replicating the conditions for life.

The recent backlash to globalism, embodied in nationalistic, nativist politics, represents the gasps of a dying mindset. We face global problems that cannot be solved without a level of international cooperation that is incompatible with chest-thumping traditions of national sovereignty and threats of mutual assured destruction.

If we do not change course, our stubborn habits could render Earth as inhospitable as an alien world.

But if all nations work together to solve our climate crisis, we might simultaneously discover the tools and techniques needed to travel and live peaceably elsewhere in our solar system.

And only then, would we deserve to do so. 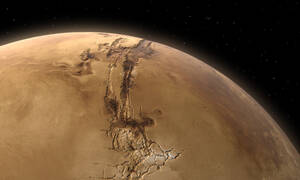 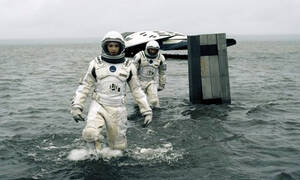 The Hitchhiker’s Guide to the ISS